A good evening bowling was witnessed by all and thanks to Ann Banner’s organisation and Woolsery for the use of their big hall the evening went well. The Federation Chairman expressed his disappointment that so few player entered the competition and hoped clubs would encourage their players to enter the competition next year. 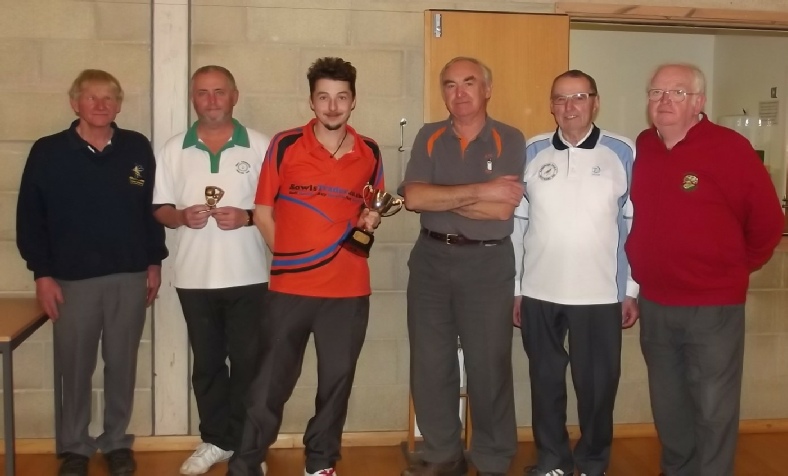 Some of the John Crossman Singles Finalists

On this mat it was touch and go although with Yarnscombe holding a narrow lead half way through by 10 - 8.  The second half of the match followed the first with both teams level on the 14th end Winkleigh lead by one shot going into the last end but Elliot James managed to get 2 shots to 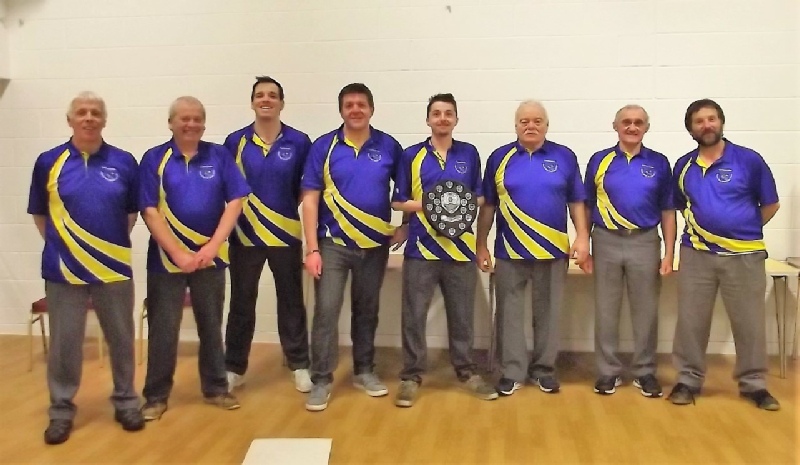 The Tony Stephens Knock-Out Final was played at Buckland Brewer on 7th March between Winkleigh Spitfires and Yarnscombe Eagles.  Well done to Yarnscome Eagles who turned out to be winners and picked up the shield,

Our thanks go to Buckland Brewer for the use of their venue and for the players of the club for all their assistance in the running of the final. 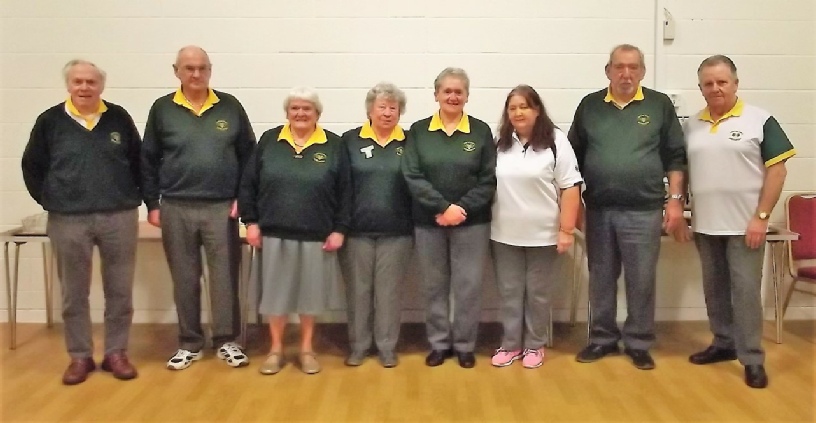 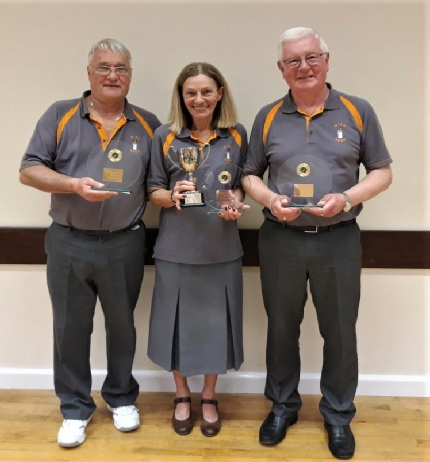 The score was five all on the fifth end, nine all on the ninth end and thirteen all on the thirteenth end! Sharon’s team just edged ahead to win by 18 - 16.

Well done to all the players.

Thanks to Pancrasweek who hosted the final, to Fred for umpiring and to all who came to support.

Our thanks also go to Jan Ovenden for organising the competition. 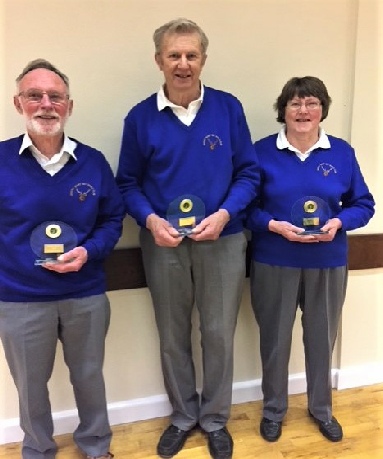 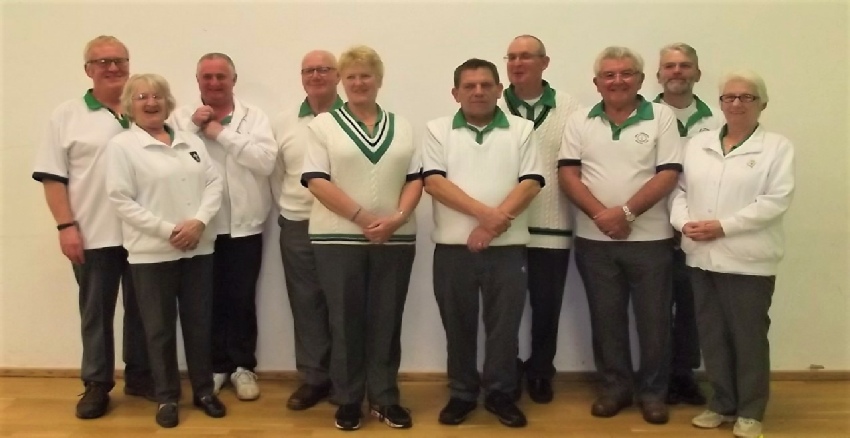 It is with sadness we hear of the passing of Mark Allen who was a member of Winkleigh.  Mark was an excellent bowler, a real gentleman. It was a pleasure to play with Mark whether on the same team or against him.

Funeral arrangements can be viewed on the Devon County Short Mat Bowls Association website at http://devonshortmat.co.uk/news.html

Over the past year or so, many penalties have been applied for breaches of the Player Registration rules.  The majority of the breaches have been inadvertent and due to clubs forgetting to register the players when they need to be brought into the team at short notice.

We think the rules could be improved in order to help teams in these circumstances whilst still retaining the ability to penalise teams for unfairly fielding ineligible players.  Of course, any player still has to be registered with ESMBA prior to playing in any Federation fixture, but the new rules will enable you to bring a player into your team without telling the Federation Competitions Secretary beforehand.  Please see the new rules for a full explanation.

There also seems to be confusion caused by the use of the word ‘registration’ in the rules so we have decided to use the word ‘nomination’.  This means that you will register players with ESMBA and will also nominate players for your teams, or as club reserves, in Federation competitions/leagues.

The new rules have been approved by the Committee and will be introduced at the start of Winter Leagues 2019-20 (1st September 2019).  The new rules cannot be applied retrospectively so any ruling issued up to that date will use the currently published rules, and penalties will be applied accordingly.

You can preview the new rules here.  They will replace the current Competitions Rules on 1st September 2019.

Winkleigh’s Pairs Tournament has been renamed Mark Allen Pairs in memory of our former player Mark who passed away earlier this year. Mark and his wife Jeanette won this tournament last year and it seemed a very fitting tribute to a fine bowler and friend.

Saturday saw twenty teams arrive at Winkleigh for this competition.

A good day of bowling, eating and enjoyment was had by all.

After an exciting match the winners were Janet Ellis and Edwin Cleave of Moretonhampstead with Gordon Leonard and Gordon Lott of Woolsery creditable runners up.

Congratulations to all players on a successful and enjoyable day. 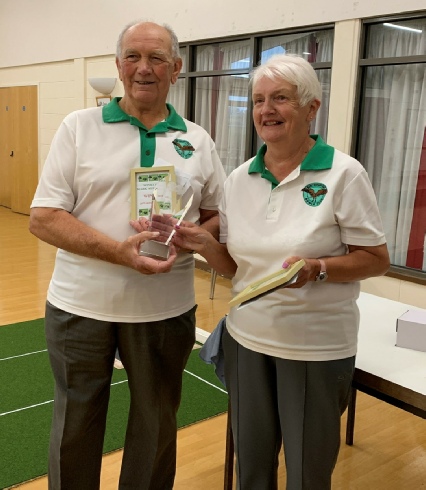 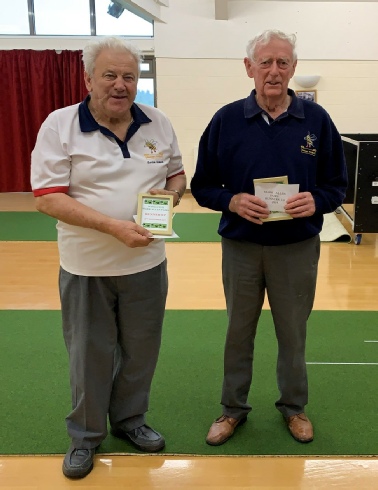 8 group winners converged on the Butler Hall at Woolsery to compete for the 2019 title, this included three former champions and one former double champion and an evening of high quality bowls was enjoyed by those watching.

In the first round of matches Fellow Yarnscombe players fought out what was probably the match of the day, George Main winning 10-7 against Jay Shaw, who had built an early lead. In the other matches Tony Main beat Martin Sexton (Wick) 13-5. Fred Niven (Torrington) beating Steve Davey (Woolsery) by two shots and Graham James (Yarnscombe) winning by nine against Grenville Gerry ( Wick).

In the Semi- finals Tony defeated Graham 14-6 in a close run battle in which he always managed to keep ahead and George after the score was 6-6 after 6 ends battled to a close run victory 10-8. This created a final between father and son in which George always managed to hang on to an early lead and was again the champion eleven shots to six. George is the first champion to retain his title since the competition began.

Our thanks go to Ann Banner for running the competition and all those involved in organisation at the venues involved. 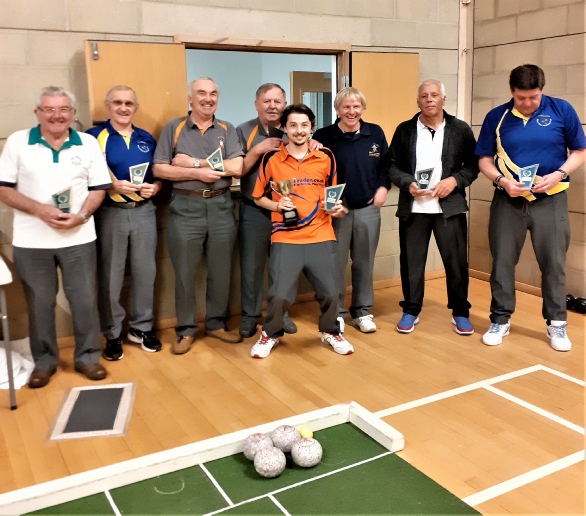 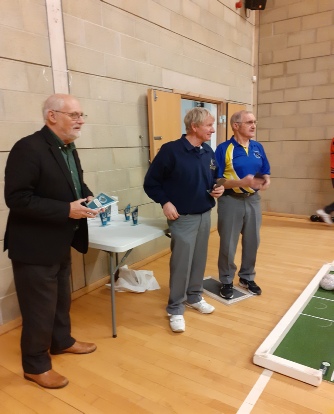 Christ Church have changed their name and have a new venue

Due to the unsuitability of the playing surface at their new venue, Barnstaple Saints home fixtures will now be played at Fremington for the rest of the Winter Season.  Some of the fixture dates have changed for their home matches and the Fixture List has been amended.  All Evening League Division 4 teams please check carefully to ensure you now have the correct agreed date for these fixtures.

He and his wife Barbara attended and are shown in the photograph seated in the middle of the front row. His daughter and her husband also travelled up from the South of the county to attend.

The evening began with a short match between the over 70’s and under 70’s the older members being delighted to win.

This was followed by an enjoyable shared buffet and a presentation, to Geoff, of life membership of the club. Drinks were purchased for all by Geoff and Barbara in gratitude for the friendship and affection shown to them.

The legend on the certificate states:

“Awarded to Mr Geoffrey Cook In recognition of his long service, dedication and loyalty to the association, together with his part in enrolling new members and assisting in winning many competitions for our club.”

Testament to his popularity was shown by the fact that the only members missing from the gathering were absent due to recent hospitalization.

Following a virtual committee meeting today and in view of the reservations expressed by many of you we have decided that the chances of us being able to have a full Winter League as proposed is very small so it has been unanimously decided that we will abandon it for the moment until a clearer way forward can be realised.  If things do get going towards the end of the year we can always organise a limited Division Fun Competition say from January and this can be set up fairly quickly with your usual cooperation.  The Committee will continue to monitor developments and meet as appropriate to review the situation and agree the way forward when applicable.

Once we are in a position to play then we will also do our best to arrange to play the outstanding knockout competitions so that these can be completed.  Furthermore we wish to be clear that the position of the clubs in the Divisions for the next Winter League 2021/22 would be based upon the results of the 2019/2020 season as recorded when all play stopped in March and we went into lockdown.

Thanks to all who have sent me entry forms already and for those that have not done so please just let me know if there are any changes in your club contacts so that I can keep my records up to date.

Finally please do let us have any comments or suggestions on the current situation which will always be welcome.